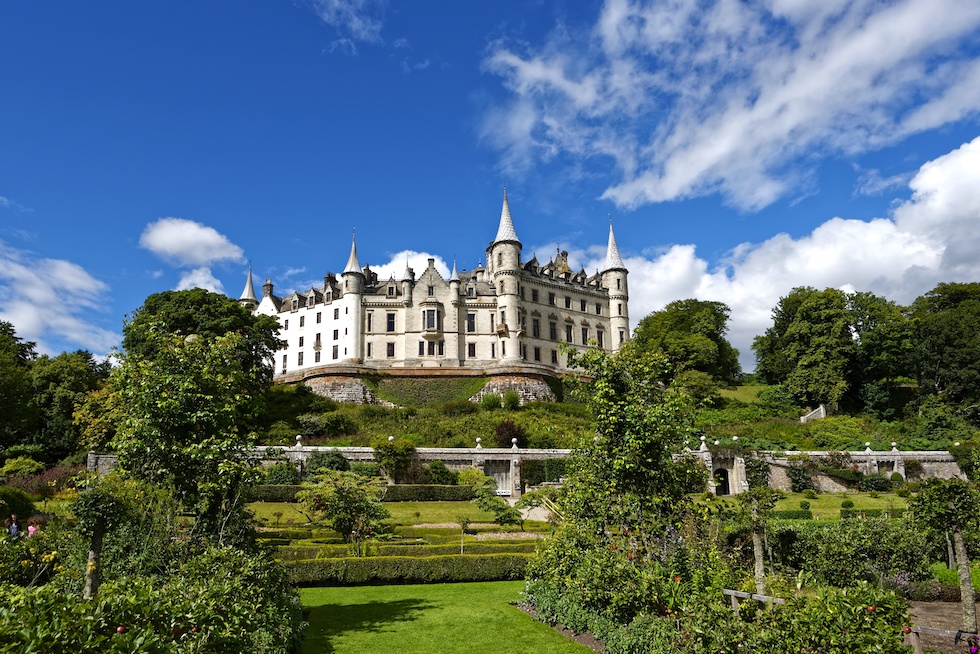 Dunrobin Castle (pictured above ) is on the east coast of the Northern Highlands overlooking the Moray Firth, just north of the villages of Golspie and Dornoch (famous for its cathedral and Royal Dornoch Golf Club). Dunrobin Castle is the most northerly of Scotland's great houses and the largest in the Northern Highlands with 189 rooms. It is also one of Britain's oldest continuously inhabited houses dating back to the early 1300s, home to the Earls and, later, the Dukes of Sutherland.

The Castle, which resembles a French chateâu with its towering conical spires, has seen the architectural influences of Sir Charles Barry, who designed London’s Houses of Parliament, and Scotland’s own Sir Robert Lorimer. The Castle was used as a naval hospital during the First World War and as a boys’ boarding school from 1965 to 1972.

Inspiration for the Castle’s gardens came from the Palace of Versailles in Paris, and they have changed little in the 150 years since they were planted, although new plants are constantly being introduced. Despite its northerly location, the sheltered gardens are able to support a surprising range of plants, including at the foot of the steps leading to the garden a huge clump of Gunnera manicata, a native rhubarb of South America that has eight foot leaves! A visit to Dunrobin’s garden is of interest to all and most particularly for the connoisseur of the formal Victorian garden.

A visit to Dunrobin Castle now includes daily birds-of-prey flying demonstrations on the Castle lawn. See spectacular shows featuring golden eagles and peregrine falcons, both resident birds in the Scottish Highlands. Learn more about other local birds of prey, as well as the ancient art of falconry. Additional attractions include more exotic species such as the European Eagle owl.