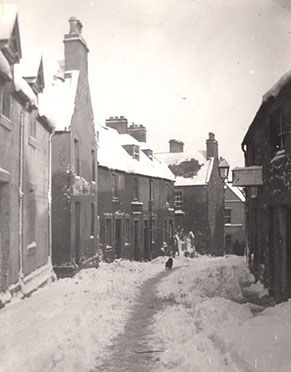 Tain Through Time is a visitor experience based around three buildings set within the beautiful and peaceful grounds of St Duthac Collegiate Church.

The Pilgrimage is a modern visitor centre built in a 17th century schoolhouse in the churchyard. It tells the story of medieval pilgrimage to Tain in two colourful galleries using images and sound. King James IV of Scotland made at least 18 pilgrimages to the shrine of St Duthac in Tain between 1493 and 1513. James IV was an energetic and forward-looking ruler who was responsible for introducing a number of innovations to Scotland including printing and the country's first medical school. He was a pious man and expressed his guilt over his involvement in his father's murder at Sauchieburn in 1488 by wearing around his waist an iron chain to which a new link was added each year. He made regular pilgrimages to shrines across Scotland: these were opportunities for making his presence felt in the remote and sometimes unsettled parts of the country.

St Duthac Collegiate church, dedicated to Saint Duthus, is said to have been built by William, Earl of Ross, who died in 1371. In 1487, James III had it converted into a Collegiate Church. James IV and V made pilgrimages to it. From the Reformation until 1815 this was the parish church; it was then abandoned and allowed to fall into decay until 1877 when it was skilfully restored and the stunning stained glass windows were installed. It is now maintained for monumental and memorial purposes.

Tain & District Museum and Clan Ross Centre holds a wide and varied collection of artefacts, documents and images relating to the social history of the area, plus a particularly fine collection of Tain Silver.